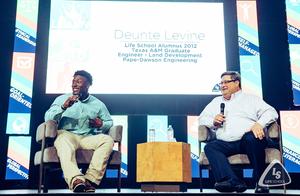 “It means you’re a cycle breaker. You’re willing to make the sacrifices others won’t...”
Civil Engineer. First-generation college graduate. Powerlifting record-breaker. These are all titles that Life High School Oak Cliff alumnus, Deunte Levine, carries with a humble demeanor and grateful spirit.
“To me, it means so much more than a title,” Levine said. “It means you’re a cycle breaker. You’re willing to make the sacrifices others won’t, but you’re also willing to make the sacrifice for others after you. Your legacy – your impact on others – can be forever.”
Levine credits his mother for his unrelenting determination. She enrolled him in Kindergarten at Life School soon after its founding in 1998 because she wanted something more for him.
“[...] She saw the values, the teachers, and the academics they had. She admired the discipline and how accountable the teachers were. That’s why she kept me in until I graduated,” he added.
Levine recalled a significant moment from fourth grade that is etched into his heart and mind.
“When I was in fourth grade, I lost my sister,” he paused. “Going through stuff like that, especially with someone so close, you don’t know how to feel. [My teacher] pulled me aside and said, ‘Listen, I know the stuff you’re going through [...] You may feel like you’re alone, but you’re not.’ She saw me at my weakest moment and my darkest hour and stepped in [...] That was one of the first times I felt like a teacher valued me as a person and actually cared,” Levine expressed.
Levine lists many people who poured into his life during his academic career. Teachers encouraged him to never give up. Coaches challenged him to sharpen his character. After spending his full K-12 career at Life School,
Levine graduated and embarked on a new journey – college.
Levine’s college plans were momentarily derailed when the junior college he planned to attend went bankrupt. He chose to enroll at Navarro Junior College where he found a passion for engineering and became one of 26 out of 200 applicants welcomed to transfer into the Civil Engineering program at Texas A&M.
With a heart for the community, Levine spent his time in the University’s Men of God Christian Fraternity Inc. and volunteered as a camp counselor at Camp Kesem, a nationwide organization devoted to providing support for children whose parents have been affected by cancer.
As his time at University came to a close, Levine not only became the first of his family to graduate from college but also received a prestigious degree in Civil Engineering. He also earned the “All American” national title for the Texas A&M Powerlifting Team and broke several records, which included deadlifting over 700 pounds.
“I was able to break records and make records, but all of that stuff didn’t really matter...” Levine said. “Being a first-generation graduate means a lot, [...] it puts a precedence for my family even higher because now they know we can do this, we don’t have to settle for less.”
After graduating in the spring of 2019, Levine accepted a position with Pape-Dawson Engineers, an engineering company, recognized for its work on projects such as the AT&T Center, SeaWorld of Texas and Six Flags Fiesta Texas. Levine is a Level One Engineer, licensed as an Engineer In Training (EIT) and working towards his credentialing as a Professional Engineer (PE).
Published November 8, 2019 Print