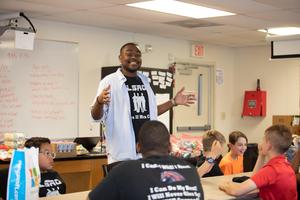 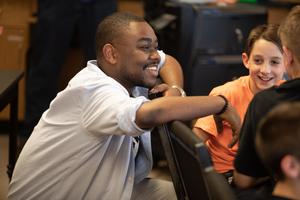 LSRO's sixth-grade boys club is a male mentoring group aimed at helping young men understand what it means to be an adult male.
When Edward Perry heard rumblings from male students about an all-girls club on campus at Life School Red Oak Elementary last year, he recognized some ruffled feathers.
“The boys were telling me ‘there’s a girls club, where’s ours?’ ” It was then that Edward – who handled tech support at the school last year (he’s now at Life School Carrollton Elementary) – also noticed that only three of the 90 staff members were men and that the boys needed more male role models.
And so the Boys to Men Club was born on the Red Oak campus for fifth and six grade boys. The club, which met one day a week after school last year (sixth-graders on Monday and fifth graders on Thursday), is a male mentoring group aimed at helping the boys understand what it means to be an adult male. It also helps teach them how to be Effective Communicators and about the importance of being Resilient – two of Life School’s 15 Life Leader profiles.
“We get them ready to be men,” said Edward who is going to have Boys to Men clubs on both the Red Oak and the Carrollton campuses this year. “We teach them things about hygiene, having good manners, and the importance of eye contact, asking good questions, and being nice to your elders. We also did service projects.”
Additionally, Edward brought in speakers who talked to the boys about everything from college, to cameras, to future career opportunities.
“We essentially tried to show them what it means to be a man,” said Edward. “I noticed growth throughout the year and our teachers noticed improvement in their grades and behavior.”
During an end-of-the-year party last year, then sixth graders Obadiah Jones, Joshua Tolliver, and Jonathan Killion agreed that they learned a lot because of Boys to Men.
“We talk about stuff we’ll do when we’re older,” said Obediah. “I like talking about different jobs, degrees and learning about things we could do in the future.”
Life School Red Oak Principal Joy Shepherd believes the Boys to Men club reflects what in essence Life School is all about.
“I am thrilled Edward started this club for our students last year,” said Shepherd. “The club is helping to prepare our students for the next phases of their lives so they are ready to meet the challenges of growing up.”
Published January 6, 2020 Print