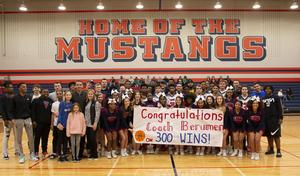 On January 2nd, 2020 the Life High School Waxahachie Boys Varsity Basketball team defeated Midland Greenwood by a margin of 50-38 to give Coach Eddie Berumen his 300th win as the Head Varsity Coach.

In his 12th season with Life School, the goal-oriented Berumen remains committed to building one of the strongest basketball programs in District 17-4A.

Prior to joining Life School, he served as the first assistant under Coach David Milson at Cedar Hill High School. Now competing in Division 4A, the Mustangs have averaged over 20 wins per season, making the playoffs 10 of the past 11 years.

Coach Berumen has elevated the Life High School Waxahachie basketball program to a well-known team of young men often noted for their character and sportsmanship on and off the court.

While pleased with the 300-win milestone, Coach Berumen is more motivated by the opportunity to instill character development in the young men that go through his program each year.

Using the game of basketball, Coach Berumen teaches valuable life lessons and skills, impacting thousands of athletes throughout his career. Coach Berumen is a LifeLeader who exemplifies humility by his willingness to serve the interests of others regardless of his status or opportunity for personal gain.

“I am thankful for the opportunity to work for such a supportive organization. I would like to thank my wife Dawn and children Logan, Maddie, and Ryan for their support and the time they sacrifice to allow me to be a coach,” says Berumen.

“Thank you to all of our assistant coaches and their families, Life School administration, faculty and staff, stakeholders and board members; to all current and former players, managers, cheerleaders, sports medicine teams, trainers, families, and fans. This accomplishment was a team effort and I’m humbled and honored by this achievement.”

The Life High School Mustangs kick-off conference play on Friday, January 17 against Ferris High School and are currently 17-8 for the season. To view a schedule of games, please visit lhs.lifeschools.net.