Parade of Choirs united hundreds of students to showcase their talents 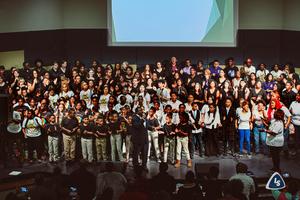 School choirs from across Dallas-Fort Worth gathered at LHSOC Sunday evening for the Parade of Choirs 2020 competition.

School choirs from across Dallas-Fort Worth gathered in Oak Cliff Sunday evening for the Parade of Choirs 2020 competition.

The event comes on the heels of violent weeks and months in Dallas, including a shooting during a high school basketball game in Oak Cliff.

Organizers addressed the spike in crime, hoping that bringing hundreds of children together could help promote healing and peace.

Elementary, middle and high school students from across North Texas showcased their talents during the gospel singing competition.

“The songs, the lyrics, the meaning, how we deliver the songs can really change someone’s life,” said organizer Kchristshan Howard, who is the choir director for Life Middle and High schools in Oak Cliff.

Howard felt this year was different given recent high-profile shootings including the shooting death of a toddler in South Dallas and a shooting during a high school basketball game that later claimed the life of an 18-year-old.

“It’s happening down the street,” Howard said. “It’s happening in our communities and it’s going to take us educators, parents, administration, citizens to come together.”

Howard devised a plan to have each participant unite in song at the end of the competition.

“There’s been a lot of crime, a lot of murder, a lot of shenanigans going on in Dallas-Fort Worth the last few weeks,” she told the crowd of parents and friends.

Howard led the students in song, and hoped DFW would hear their pleas for peace and unity.